The tomb of St. Paul

His tomb immediately became an object of veneration: a memorial cell was built on it where, during centuries of persecution, the faithful and pilgrims went to pray.
Basilica Papale di San Paolo Fuori le MuraHistory
IN THE CENTURIES

The History of the Basilica

The Constantinian basilica … In the year 313 the emperor Constantine proclaimed freedom of worship, putting an end to the persecution of Christians. He had basilicas built over the tombs of Peter and Paul. Pope Sylvester consecrated St Paul’s around the year 330. The small dimensions of the building were due to the limitations of the space available. The basilica faced east towards Jerusalem and was bounded on that side by a cliff and by the ancient Via Ostiensis.

… and the great Theodosian basilica
of the fourth century. Given the rapid increase in the number of pilgrims, the need to expand the capacity of the building, the difficulty of simply enlarging it and the impossibility of moving the tomb, the three emperors then reigning, Theodosius, who in 391 would proclaim Christianity the state religion, Valentinian II and Arcadius, built what was then the largest basilica in Rome. It faced west and was consecrated by Pope Siricius in the year 390

The Sacred Building
OUTSIDE 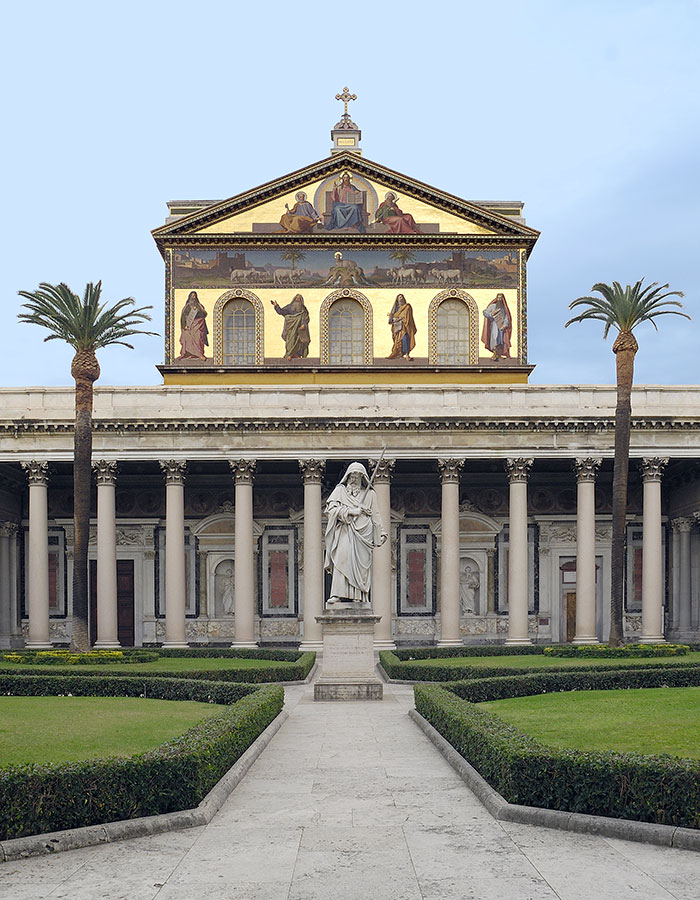 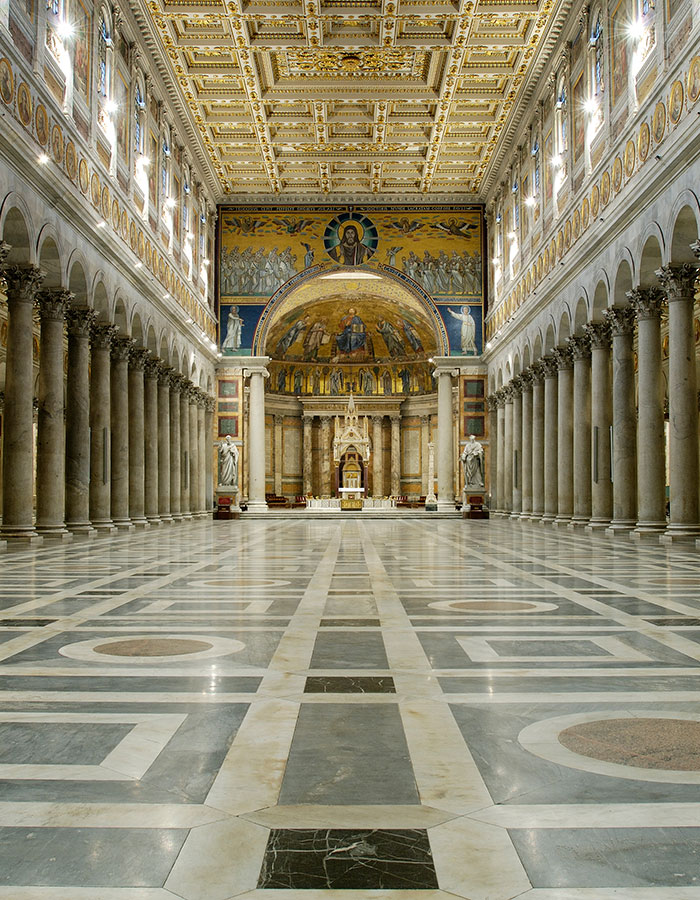 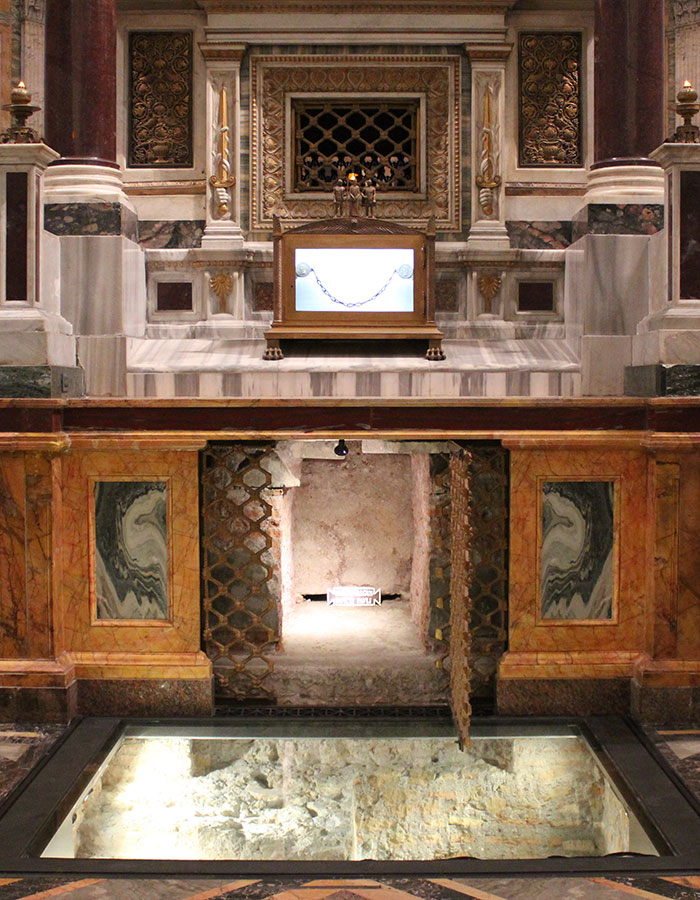 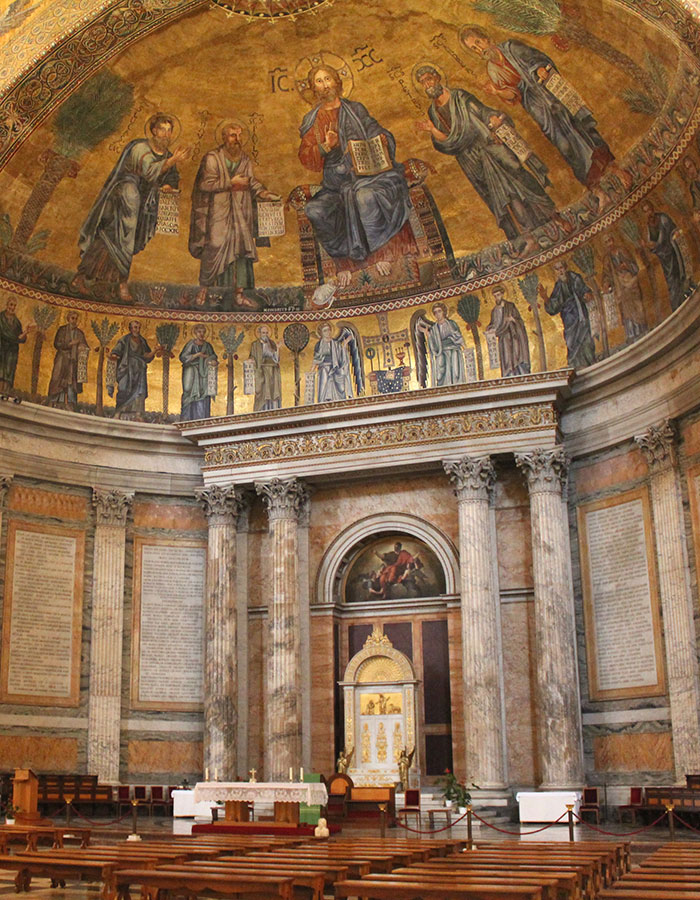 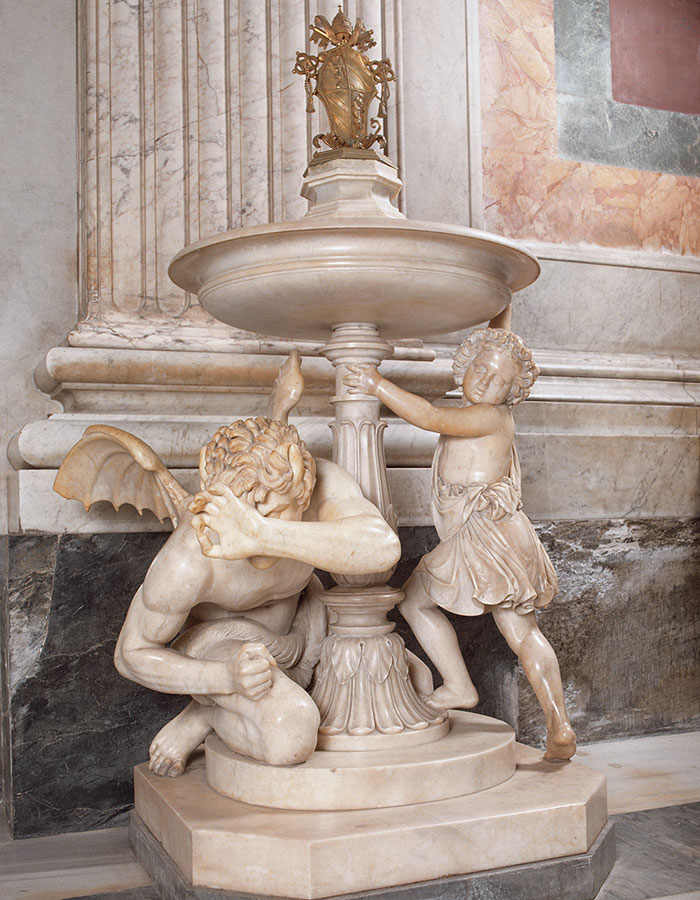 The Transept and the Chapels 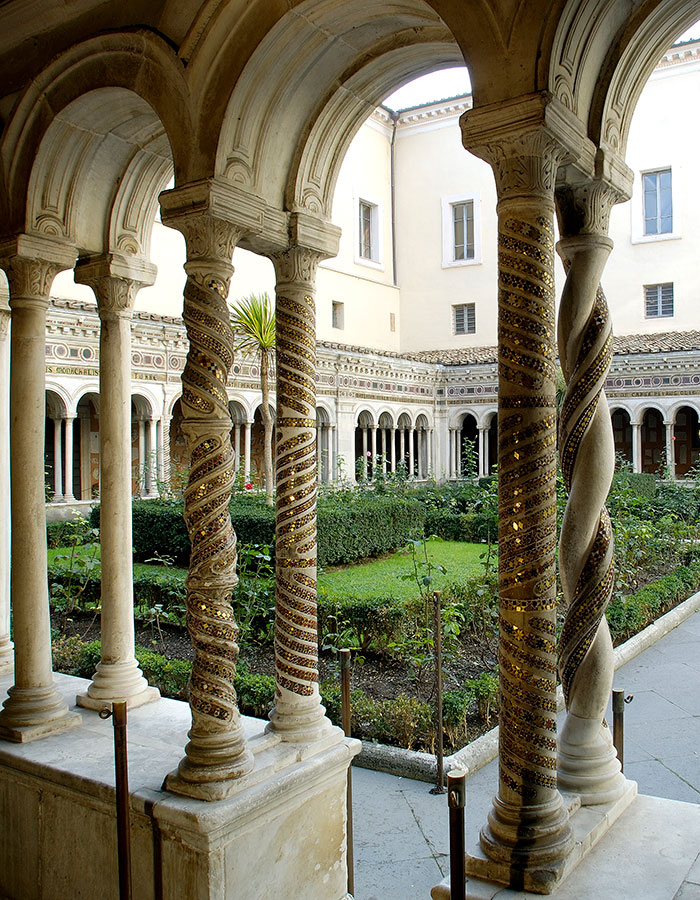 The importance of the Basilica

The sacred building we are about to describe was constructed outside the walls of Rome to honour the mortal remains of the apostle and martyr St Paul, to preserve his memory and to celebrate his cult.

With the Edict of Milan in the year 313, the persecution of Christians ceased and the emperor Constantine had a basilica built over the tomb of the apostle of the gentiles who had been beheaded in the year 67 and buried in the necropolis near the Roman Via Ostiensis.

The Constantinian basilica, entered from the east, quickly proved inadequate. It was replaced by the grandiose second basilica (known as “the basilica of the three emperors”) inaugurated by Pope Siricius in the year 390. The new basilica faced towards the river Tiber. Embellished down the centuries it lasted until 1823 when it was largely destroyed by a great fire.

On 10 December 1854 Pope Pius IX dedicated the third and current basilica, a monumental building in the neo-classical style rebuilt with the same dimensions as the previous one. The architect responsible was Luigi Poletti.

In the complex of St Paul’s visitors will encounter traces of different periods: early-Christian, Byzantine, Gothic and Renaissance. It is hoped that the beauty of this sacred edifice dedicated to St Paul may continue today to serve the universal mission of proclaiming salvation in Christ. Of that salvation the apostle himself was an untiring messenger.

Between 2 May and 17 November 2006 a delicate archaeological excavation took place in the area under the high altar (“the altar of the confession”). This led to the opening of the place where the sarcophagus rests. Since 2007 it has been possible to go down and pray before the sarcophagus of Paul, now partially visible.

The simple construction erected by Christians in the first century

Around the year 67, at the end of the reign of Nero, the apostle Paul was beheaded outside the walls of Rome at the place called ad Aquas Salvias (today “the Three Fountains”).

The series of portraits of the popes, begun in the fifth century

The famous series of circular portraits (see section 2) begun by Pope Leo the Great (440-461) and re-established under Pius IX continues to this day and is the only one of its kind in the world.

Centuries of ups and downs...

The basilica survived centuries of difficulties: earthquakes (in the years 442 and 1349) and plundering (by the Lombards in 739 and by the Saracens in 847) that led to the construction of fortifications that would last for five centuries; there was the fire of 1115, the sack of Rome by the Lansquenets of Charles V in 1527 and the flooding of the Tiber in 1700. These are but some examples.

The reconstruction in the 19th and 20th centuries

Pope Leo XII appealed to the Christian world to help in the immense task of the reconstruction, of which the architect Luigi Poletti was the main protagonist. When the bronze doors of Antonio Maraini were mounted in 1931, the basilica was completed. Pope St John XXIII, visiting the abbey on 25 January 1959, announced his decision to summon an ecumenical council of the Church: the Second Vatican Council was born.

Apostle of the Gentiles

Outstanding theologian and indefatigable founder
The dynamic life of Paul and his imposing status as apostle of Christ are known through the Acts of the Apostles of St Luke, and through the letters Paul wrote to the various Christian communities he founded. His letters are the earliest Christian works of theology and provide the first witness to how the earliest Christians were organized.
Saul-Paul

Born in Tarsus of Cilicia in modern Turkey, he received the Hebrew name of Saul because he belonged to the tribe of Benjamin, which was the tribe of Saul, first king of Israel. He also had the Roman name of Paul, because his father had acquired Roman citizenship and wished to thank a member of the gens Pauli.

By land and sea
At the beginning of his career Paul was a zealous Pharisee, observant of the Law of Moses and a persecutor of the followers of the Nazarene. One day, however, while travelling to the synagogues of Damascus where he intended to arrest Christians and take them in chains to Jerusalem, he had a vision of the risen Christ. This vision transformed his life. He realized that Jesus of Nazareth was the key to the Scriptures and the fulfilment of the promises made of old. By dying and rising from the dead, Jesus had brought redemption. Paul then threw himself into tireless evangelization journeying through much of the Roman world.

Apostle of the whole world
Paul travelled in Asia Minor and Greece and throughout the Mediterranean proclaiming the gospel to Jews and gentiles, to men and women, to slaves and free, establishing Christian communities and inspiring co-workers. He is called the apostle to the gentiles. By obeying the call of Jesus, he surpassed the love of the Law and allowed himself to be seized by Christ’s law of love: “Christ loved me and gave himself for me” (Galatians 2:20). Thus he brought the good news of Christ to the peoples of the known world.

Martyrdom
Paul was arrested in the temple of Jerusalem and transferred to Caesarea. Being a Roman citizen he exercised his right to appeal to Caesar and to be judged in Rome. Later vindicated, he emerged a free man. He was again in Rome during the persecution of Nero. Arrested and condemned as a Christian he was beheaded ad Aquas Salvias, just outside the city in about the year 67.

A living testimony
He was buried in the necropolis beside the ancient via Ostiensis. His tomb rapidly became a place of pilgrimage and has remained so ever since. In the early fourth century the emperor Constantine ordered the construction of the first basilica in his honour.